It was the year of the comeback for theatres — after a quiet couple of years, watching movies in multiplexes is slowly beginning to pick up popularity again. There was a lot to look forward to in films, production, and most of all — soundtracks. Consistent advances in music recording and production technology are resulting in some unique projects. 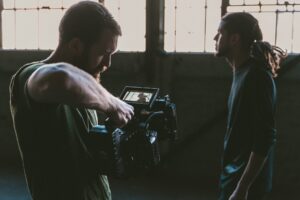 March 2022 was when culture and cinema underwent a reform, with the release of the widely anticipated film The Batman. When the trailer with Nirvana’s “Something in the Way” appeared on everyone’s social media feeds, it was clear that music would be a defining factor in the film’s atmosphere.

Michael Giacchino, the composer, had to make a big leap from his regular films like Up, Ratatouille, and Zootopia into the grim realm of Gotham. The film’s soundtrack created a suitable atmospheric darkness that effectively represented Robert Pattinson’s Bruce Wayne’s dread and cynicism. The original soundtrack also includes theme songs for each main character, including The Batman, Catwoman, and The Riddler. The haunting musical aura was one of the elements that distinguished this rendition of the vigilante narrative from prior incarnations.

It’s one thing to write a memorable theme, but this soundtrack carries the film ahead, generating tension and propelling it from one heart-pounding scene to the next. The music is also surprisingly poignant at moments, especially when dealing with the Bat and Cat’s growing passion. The flare sequence is powerful, with Batman transformed into a beacon of hope, but it’s Giacchino’s soundtrack that actually makes your heart move in the climax.

Elvis, the larger-than-life musical biography, is accompanied by a star-studded soundtrack. There were many authentic Elvis Presley songs in the film, many of which were delivered by lead actor Austin Butler in a convincing mimicry. Butler channelled Elvis Presley with versions of “Hound Dog,” “Trouble,” and “Baby, Let’s Play House.” Baz Luhrmann has a history of assembling contemporary artists to contribute to his film soundtracks. Elvis invited Eminem, Doja Cat, and Denzel Curry to write unique songs to complement the excitement of the movie. In addition, performers such as Kacey Musgraves, Stevie Nicks, Mneskin, and Jack White performed covers of iconic Elvis tunes. The soundtrack also got nominated for a Grammy Award.

When he juxtaposes such artists against a 1950s setting, it’s pure Luhrmann. It’s hectic and cluttered, for a film that’s also a shaky carnival itself. While Luhrmann uses classic musician biopic clichés, he also turns them on their heads by racing over aspects of the King’s life and career as seen through the eyes of his ghoulish manager Colonel Tom.

Everything Everywhere All At Once

“Everything Everywhere All At Once” is a mind-blowing work. Not simply because of everything Daniels’ jam-packed, maximalist picture of life in today’s nihilistic, anxiety-filled world throws to the audience. But it’s a surprisingly humane knife that slices through the clutter.

There don’t seem to be enough words to express what makes “Everything Everywhere All At Once” so fantastic, but here are a few: It’s a ridiculous, gonzo, charming, humorous, and heartbreaking sci-fi film. It’s a multiversal adventure that makes the most of Michelle Yeoh’s tremendous talents — surfing between comedy, drama, romance, martial arts, etc. The music for a film of this size was composed by the band Son Lux, a production that took the musicians two years to complete. Their lengthy and hard labor paid off since the unique score is the ideal complement to the daring film. The music included sounds that might represent both the mundane reality of the Wang family’s daily existence and the magical mysticism of the universe. Artists such as Mitski, David Byrne, Moses Sumney, Randy Newman, and André 3000 contribute to the original motion picture soundtrack.

The music of “Black Panther: Wakanda Forever” was vital to the emotional journey at the core of the film. “Wakanda Forever” needed to find a way to continue ahead without the film’s hero, Chadwick Boseman, and get the audience on board with someone else carrying on the mantle of Black Panther. Göransson’s terrific soundtrack reflects the film’s multiple elements as well as all of its multicultural characters. He also worked with music historians to unearth long-lost Mayan music to represent Namor’s oceanic home of Talokan.

The music of “Wakanda Forever” offered us Rihanna’s first new song in five years, and “Lift Me Up” wonderfully captures the mood of the film, playing just as we’re grabbing for Kleenex. Burna Boy, E-40, Tobe Nwigwe, Alemán, Fireboy DML, PinkPantheress, and many more may be heard on the soundtrack as well. Göransson worked on both the score and the accompanying soundtrack, including instrumental versions of important tunes that do not appear in their entirety in the film. Everything was exclusively composed for “Wakanda Forever.”

A score composer bears a responsibility of establishing the tone of the movie with sound. Sound depicts emotion, marks tonal shifts, and constructs the cinematic universe. A score also serves as a rhythmic bridge between scenes, allowing the audience to immerse themselves in the film’s flow and appeal.

If you are looking for the new generation assistant that will take your film score to the next level, head over to Beatoven.ai for the tune that carries your story.